Like most places on Earth, Georgia hosts a variety of different snake species, most of which are non-venomous. However, many people encounter potentially deadly venomous snakes on a regular basis in their yards, pools, or even homes! It is important for you to be able to identify the different species of venomous snake found here in Georgia so that you know when to call us to remove them, using humane pest control methods. Below we will list all 6 species of venomous snake found in Georgia, and give you information about each that will allow you to better deal with them in the event of a future encounter.

There are 3 species of rattlesnake native to Georgia, all of which are distinguished by their characteristic rattle and beautiful, brown patterns on their skin.

Eastern Diamondback Rattlesnake – The largest species of rattlesnake in Georgia, the Eastern Diamondback can also boast of being the heaviest venomous snake in the Americas and the most dangerous snake in North America. Growing up to 8 feet long and packing a massive set of fangs, this snake is easily recognizable and should always be avoided until a pest control technician using human pest control principles can arrive on-scene.

Pygmy Rattlesnake – The second type of rattlesnake species, the pygmy rattlesnake, rarely reaches more than 2 feet in length. While its venom is not considered lethal to a human adult, it poses a threat to children and the elderly, and should be removed immediately by a trained professional if spotted in your yard or home.

Timber Rattlesnake – The final type of rattlesnake found in Georgia is the timber rattlesnake, a moderately sized reptile that seldom grows longer than 5 feet. Found along the entire eastern coast, the timber rattlesnake packs enough venom to take down an adult man. However, it has a very mild disposition and will generally not attack unless severely distressed. As with the previous snakes, however, caution should still be maintained and a humane pest control technician should be called to deal with the potential threat in the event you spot it in your yard or home.

Copperheads – one of the most common snakes in the Savannah area, the copperhead has the weakest venom of any snake on this list. However, it is a very aggressive snake and will strike with little provocation, so care should be taken to avoid it as much as possible.

Cottonmouths – a more-dangerous, close relative of the copperhead, the cottonmouth is a type of pit viper distinguished by its white mouth and throat. Found mostly in swampy or aquatic areas, the aggressive cottonmouth is capable of delivering a fatal bite and should only be handled by a trained professional.

Eastern Coral Snake – the coral snake is an exceptionally mild-tempered but very venomous snake found in all of southern Georgia. Though its venom can very easily take down a grown man within hours, this colorfully banded snake rarely bites unless intentionally handled. Though responsible for only about 1% of all snakebites nationwide each year, the coral snake is still a highly dangerous snake that should never be handled by a non-professional.

All of the snakes on this list are dangerous and should only be handled by a certified professional with an acute knowledge of humane pest control principles. If you have a snake problem, please call Preferred at (912)-236-5135 and make us your Pest Services Company today! 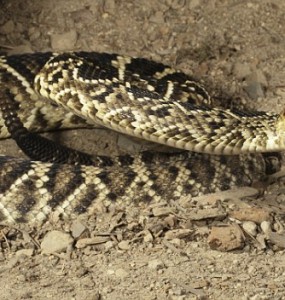